Laura Prechel is dedicated to helping Maury County’s stray dogs find a home of their own. She first moved to Columbia to purchase a home large enough to foster dogs, but her ambitions to care for homeless animals soon outgrew her house. While hosting dogs, Prechel began volunteering every Saturday at the Maury County Animal Shelter. Hesitant of the shelter’s kill policy, when she learned of the efforts by Proverbs 12:10 Animal Rescue to relocate the dogs bound for euthanasia, Prechel continued to volunteer at the local organization. “Here, most days, the dogs don’t get out,” Prechel said. “On a Saturday, they will do a little better, but during the week, they don’t get out of their kennels.” But with an influx of animals in the Fall 2016, Proverbs could not continue that effort at the county shelter. At one point, an urgent alert was sent out by the Maury County Animal Shelter every 10 days. “We could barely get them all out, and then the next day another list would be released,” Prechel said. She then started contacting other local rescues in Tennessee, but they were all full. “Some of the dogs are six months or nine months old, and it just felt wrong for them to die just because there is not enough space,” Prechel said.

After obtaining a list of contacts for Petsmart Rescue Wagon Program, a transport service for stray animals in need of adoption, Prechel began reaching out to shelters beyond the Southeast. With little time to spare, she found a shelter in Delaware that would take six dogs. She contacted a nearby organization that transports animals between shelters, but Delaware was too far a drive. “I thought ‘I’ll drive them then,’ so a friend and I rented a minivan and I loaded up the dogs and drove up to Delaware.” Just a few days before Thanksgiving, she drove through the night to the Brandywine Valley SPCA’ s Georgetown Campus. “I was driving down the road at 4 in the morning, and I started thinking, ‘What am I doing?”‘ Prechel said.
“But it is absolutely worth it to save their lives and give them a second chance. I knew those animals will have a family that loves them. It is very worth it to me.” Each of those dogs were adopted within the following two weeks, Prechel said. With many shelters hesitant to take pit bulls, Prechel’s next mission was to find a shelter that would take the blackballed breed. She found her answer in Iowa’s Regional Humane Society of Dubuque. Next came the Animal Welfare Association of Voorhees, New Jersey, which also began to take animals, sometimes meeting Prechel in Delaware. “They just keep very active in the community, they keep everyone engaged with community events and fundraisers,” Prechel said of the organization. Driving 10 to 13 hours straight only to drop off the dogs and then turn around became a regular event for Prechel. “I’ll take 20 dogs to Delaware, and before I get home, I’ll see three of them have been adopted. Within a week, or two weeks tops, they will all be adopted,” she said. “Before I am ready, the shelter is ready for me to make another trip.” Her network has grown to more shelters across the Northeast and Midwest but some struggles still remain. Dogs with heartworms are still difficult to find spots for. 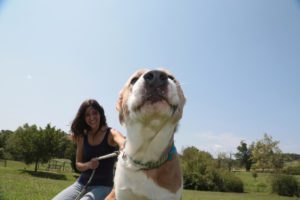 She said treatment can be more expensive as the condition is less common in the North. Thankfully, she has found several shelters willing to take dogs with the condition. With Prechel’s network growing, more dogs can be transported to a single shelter and then transferred to other partnering facilities. “Ideally, I’ll move 30 or 40 out of here per month,” Prechel said. “Since I am consistently hying to move the dogs out, the shelter has not posted many urgent lists.” Prechel’s ongoing dedication brings great relief to the Maury County Animal Shelter’s administrators. “She does not ask for a thing, except for maybe a kiss from a dog once in a while,” the shelter’s director Denise Brantley said. “She has saved the lives of a lot of dogs and cats. We are now able to move more animals through here. If it was not for her, many dogs would not have left out the front door. There is no shortage of animals corning through here.” Next to spaying and neutering, Brantley said Prechel is the best form of population control of the county’s stray animals. Since her fist trip in November 2016, she has transported more than 25 dogs that are now in homes. The shelter has sent out two urgent lists since she began her efforts. “It is amazing, it is just a really good feeling to do it. ” Prechel said. “Sometimes these turn into 30-plus hour trips but it is so worth it in the end when you start unloading the dogs and you start seeing adoption photos. And I know why I am doing it. Dogs are my passion.”

Tails of the Trail, a non-profit organization where public participants hike with shelter dogs for much needed exercise and socialization, is now working with Prechel to start a new effort. This new independent nonprofit, Freedom Ride, will work to transport dogs in danger of being euthanized from across Middle Tennessee to Prechel’ s growing network of out-of-state shelters. Tails of the Trail team members are working to raise $45,000 to purchase a van to transport the animals. “Hopefully we can get the Freedom Ride on the road,” Prechel said. “If we do this regionally, the goal would be about 1,000 dogs per year.” She said the process of registering the organization is underway. “It would be great to help the other shelters, and not just Maury County,” Prechel said.

Although a new organization is in the works, to support Prechel’s current efforts, she invites locals who may have time during the week visit the Maury County Animal Shelter and volunteer to walk the dogs. “I have been impressed with the dogs here,” Prechel said. “They are so happy and friendly, especially because they don’t get walked. It amazes me that they are just happy. I think there is a misconception that a shelter is such a sad place. Just knowing that you are helping the dogs is a wonderful thing.” Prechel is also looking for potential drivers to donate their time to transport the animals, as well as donations to support the cost of the van rental and gas and medical treatment for the dogs. “I didn’t think I would still be doing this because I thought other people would stand up and that just has not been the case,” Prechel said. “It is physically taxing, but I enjoy it because of the result.” 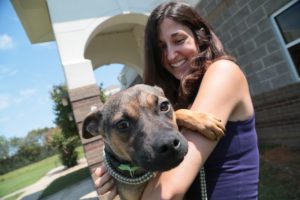 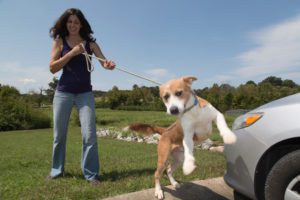 Laura Prechel and Max enjoy a day in the sun at the Maury County Animal Shelter. (Staff photo by Mike Christen)